We are proud of our culture and our involvement in progressing the Transport industry. Here we share our thoughts and ideas as well as News on the progress we are making as a business. 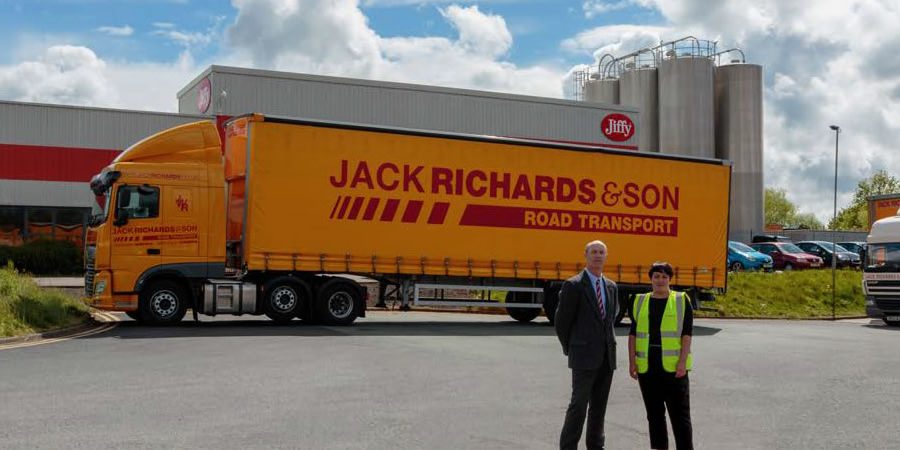 Jack Richards & Son Ltd have been appointed as the sole transport provider for Jiffy Packaging following a rigorous procurement process.

Having worked together on a partial contract for the last three years, the relationship between these two Northern companies has flourished, giving Jack Richards & Son Ltd the opportunity to demonstrate their reputation for reliability. The haulage company has now secured 100% of the contract which Barrie Allen, Technical Director at Jiffy Packaging, puts down to the quality and efficiency of the work. He told us,

“From the turn-out of the drivers to the courtesy of the office staff, the entire operation is seamlessly professional.”

To support the Jiffy Packaging contract which is now in place for the next three years, Jack Richards & Son have increased their fleet by 5 vehicles. This nationwide account will require a minimum of 19 vehicles per day in quieter periods and upto 40 vehicles per day at peak times. The geographic footprint of Jiffy Packaging’s customer base spans the UK from high in the north of Scotland right down to Taunton, Somerset.

“We are absolutely delighted to have won the Jiffy business; it reinforces what a great relationship we have with them. A contract like this also gives us greater stability for the company and helps us keep jobs secure for longer. To help us win the work, we created solutions for their needs and kept the numbers competitive.”

Barrie Allen went on to say: 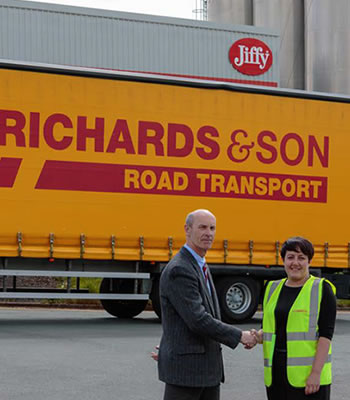 “It’s easy working with Jack Richards & Son; it’s always hassle-free and their communication is brilliant. Everything runs true. Having worked together for the last three years on a partial contract, we were happy to award them the full 100% as we have such a good history together.”

With environmental impact top of the agenda for most haulage firms, Mary Doyle explained what Jack Richards & Son Ltd are doing to lower their carbon footprint:

“We drive up efficiency by using increased load fills: less trailers on the road mean less emissions and with better planning we can minimise travel time. Our newer Euro 6 DAF trucks produce 7% less carbon emissions than their predecessors and we continuously look at new technology for the vehicles to make them even more efficient.We run a fleet of vehicles that are all less than four years’ old and we have our own on-site workshops to maintain the vehicles, including routine tyre pressure checks and other key factors which improve fuel efficiency.”

An established business that dates back to 1964, Winsford-based Jiffy Packaging has seen major investment in the last 12 months with the addition of a bubble film extruder. The new machinery gives them greater capacity and more flexibility for the varying needs of their customers.

Managing Director of Jiffy Packaging, Richard Gregg was full of praise for the haulage company telling us:

“We have a very positive relationship with Jack Richards & Son. With all the ongoing investment in our company, we now have a transport partner that will grow with us in the future.”

I'm fine with this